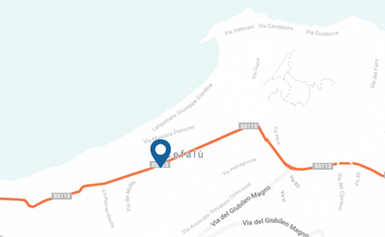 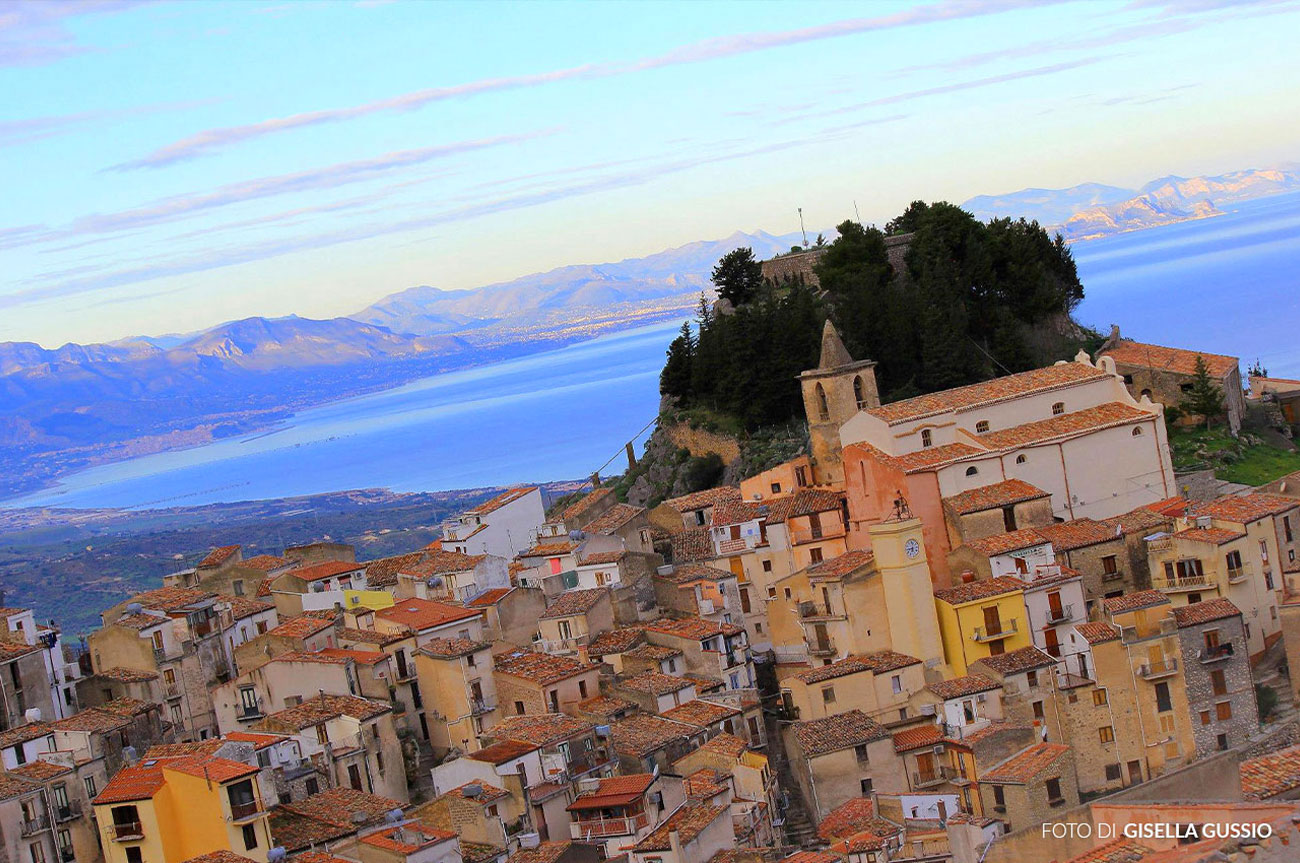 Discovering the treasures of Gratteri, the most mysterious village of the Madonie

If you are ready to explore one of the oldest and most characteristic villages of the Madonie still little known by a hit and run tourism, you can only choose this itinerary, to discover the history and legends of Gratteri.

The meeting is scheduled at Belvedere Ganci Battaglia, where one of our narrators will welcome you and accompany you throughout this fascinating journey. However, before starting our tour, a photo of the Belvedere is customary, to capture a breathtaking view of the Tyrrhenian coast, where, during the clearest days, you can also glimpse the Aeolian Islands.

It is not by chance that Gratteri has been nicknamed the “terrace on the Tyrrhenian”. We will start with a nice walk, from the Ecce Homo bridge to Portella Carruba, so called due to the presence of a carob tree, already mentioned in the 1500s sources. From there, you can admire a bucolic scenery, similar to a crib with lush pastures in front of it the suggestive church of the Convent of the XII century.

In the distance, the entire valley will appear up to Mount San Calogero, which dominates the Gulf of Termini Imerese. Below, we will move to visit the historic environmental museum of the Municipality, recently restored, located on a hill from where you can see what remains of the oldest district, originally called the Terra Vecchia and today Conigliera, with its precipice walls above the “Mouth of Hell“.

Walking through the narrow streets of the town, we will cross the entire main street, until we reach the fountain of the Ninfa, located in a villa in front of the Mother Church. We will tell you the story of that stone shell, similar to that of the nearby Grattàra Grotto, which could be considered the Genius Locid of the ancient “cratered” village.

The first church to visit is the parish church of St. Michael the Archangel which houses the miraculous relics of Jerusalem and valuable works of art by the poor. After a small refreshment to let you taste the typical products of the local shops, we will accompany you to the church of San Giacomo, Protector of Gratteri, which houses the beautiful statue of the Apostle, revered with so much devotion by the Gratteresi.

Near the neighborhood of the same name you will also find the poet’s house and a typical stone architecture for collecting rainwater, “u cabbubbu“. From vicolo San Giacomo then, we will move to the district of Via Fiume, where we will show you the three medieval bridges and an underground cistern, the Fantina well, covered in the second post-war period to make the path suitable for vehicles.

In fact, an underground stream, the Crati, still flows today under Via Fiume, which, coming down from Pizzo di Pilo, crosses the town dividing it in two, the oldest part from the new one. year 1900, it bore the name of Via dei Saraceni. 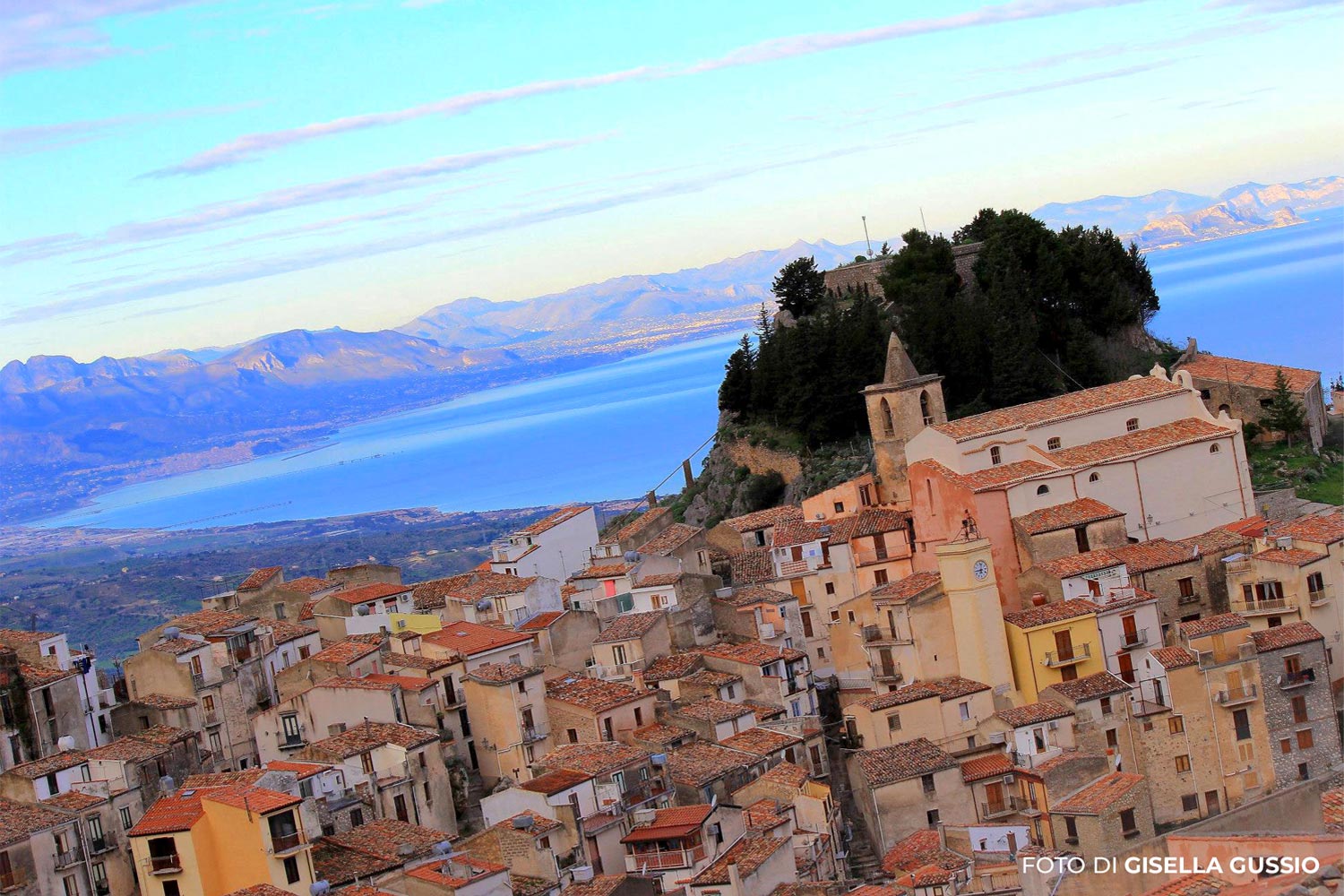 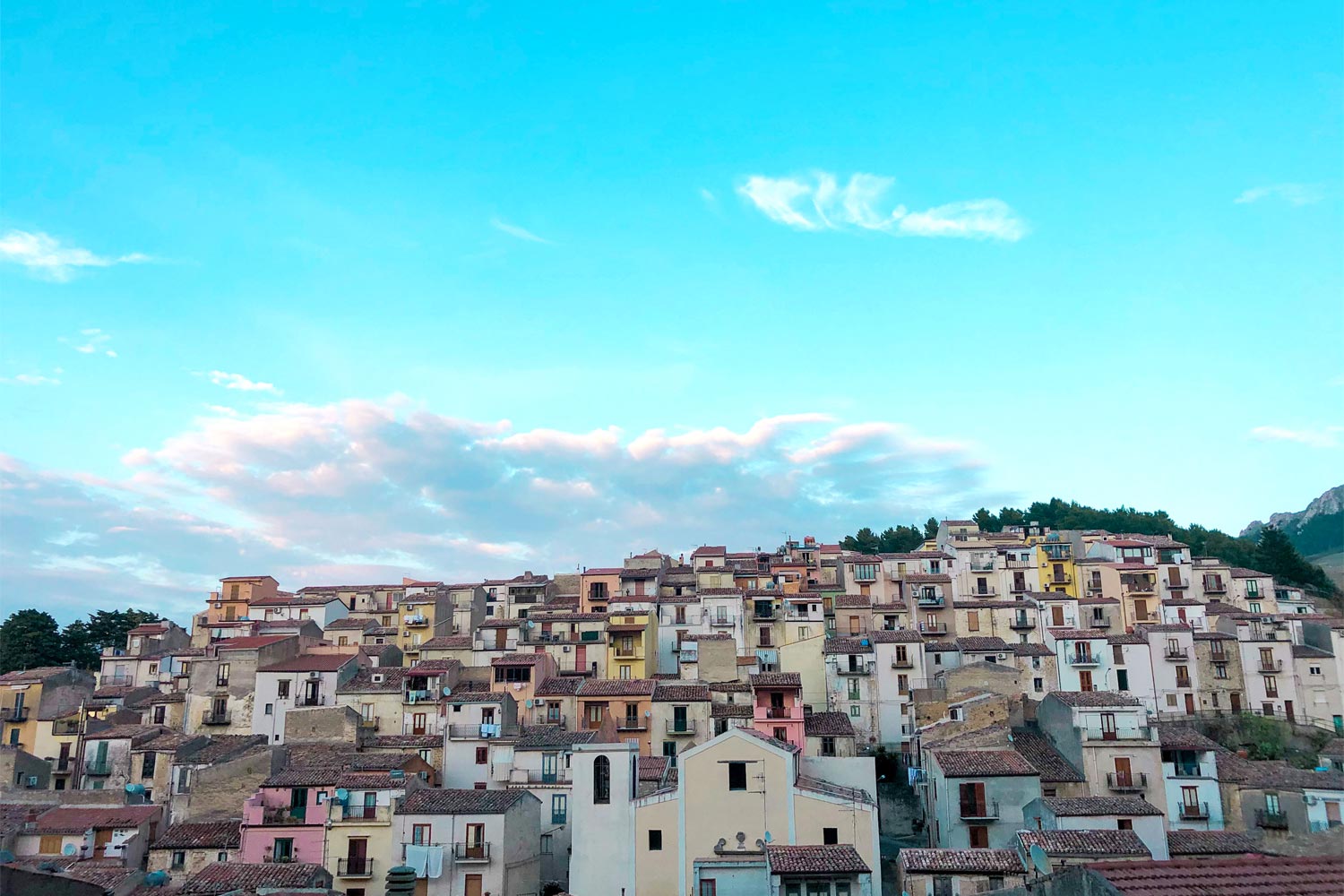 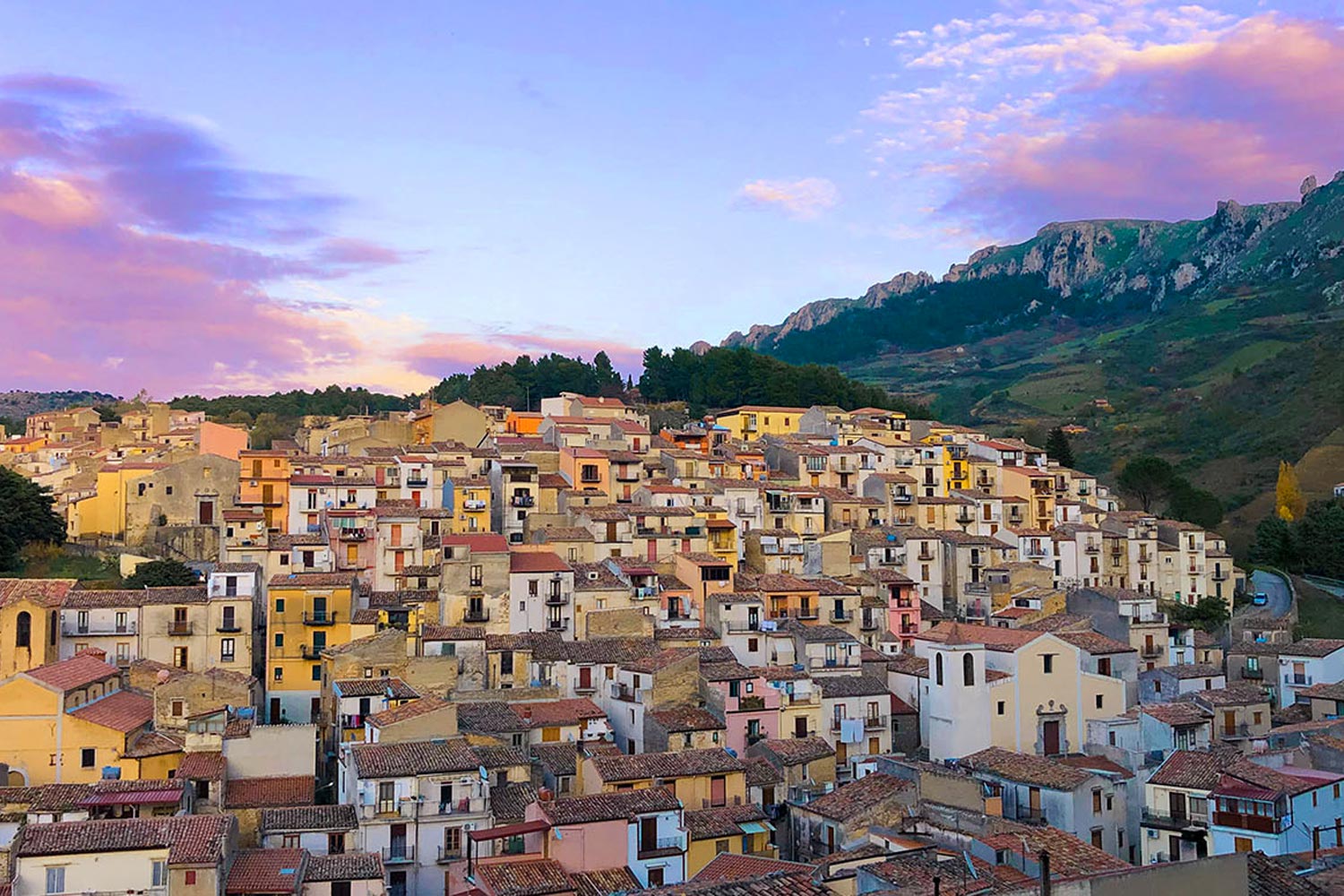 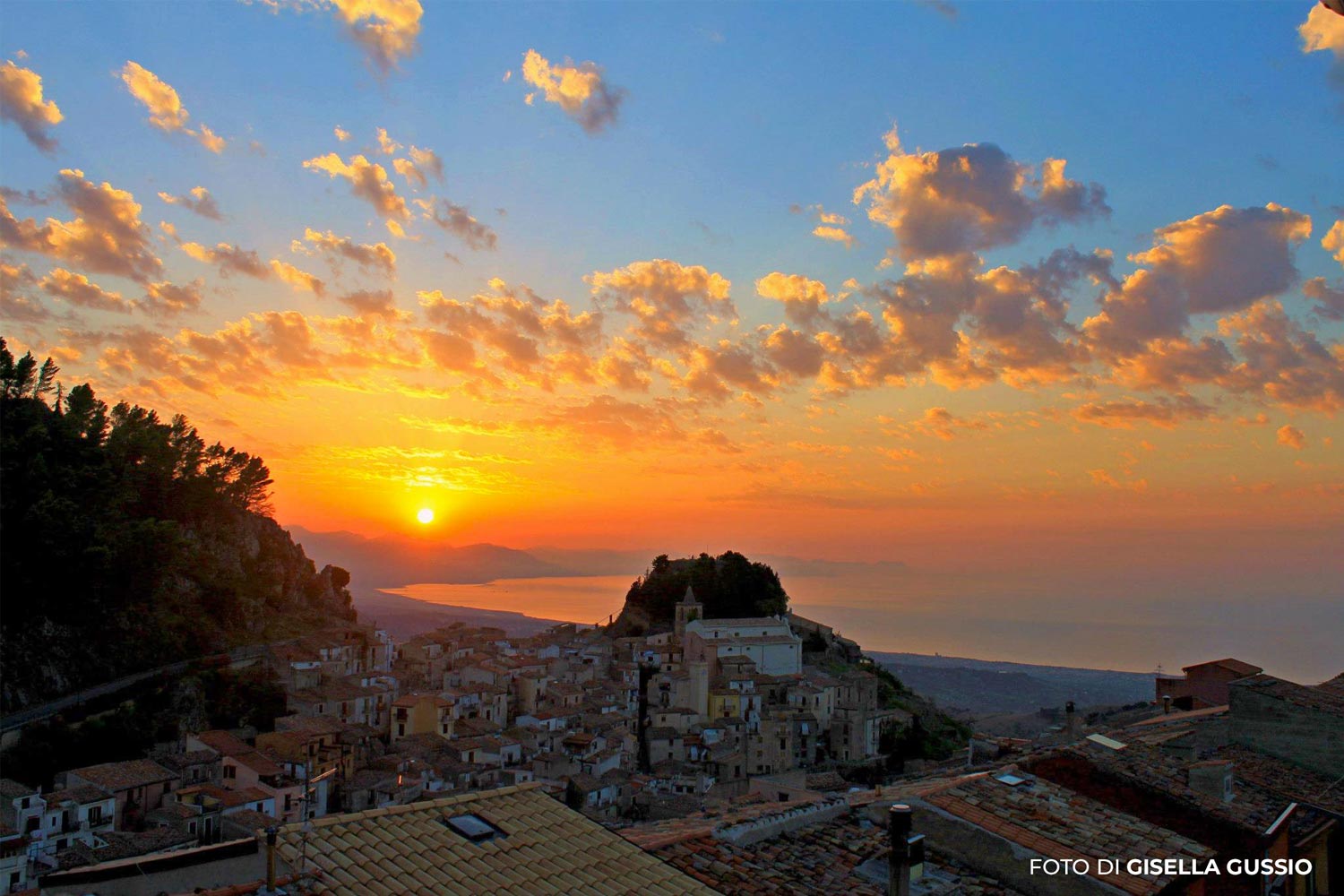 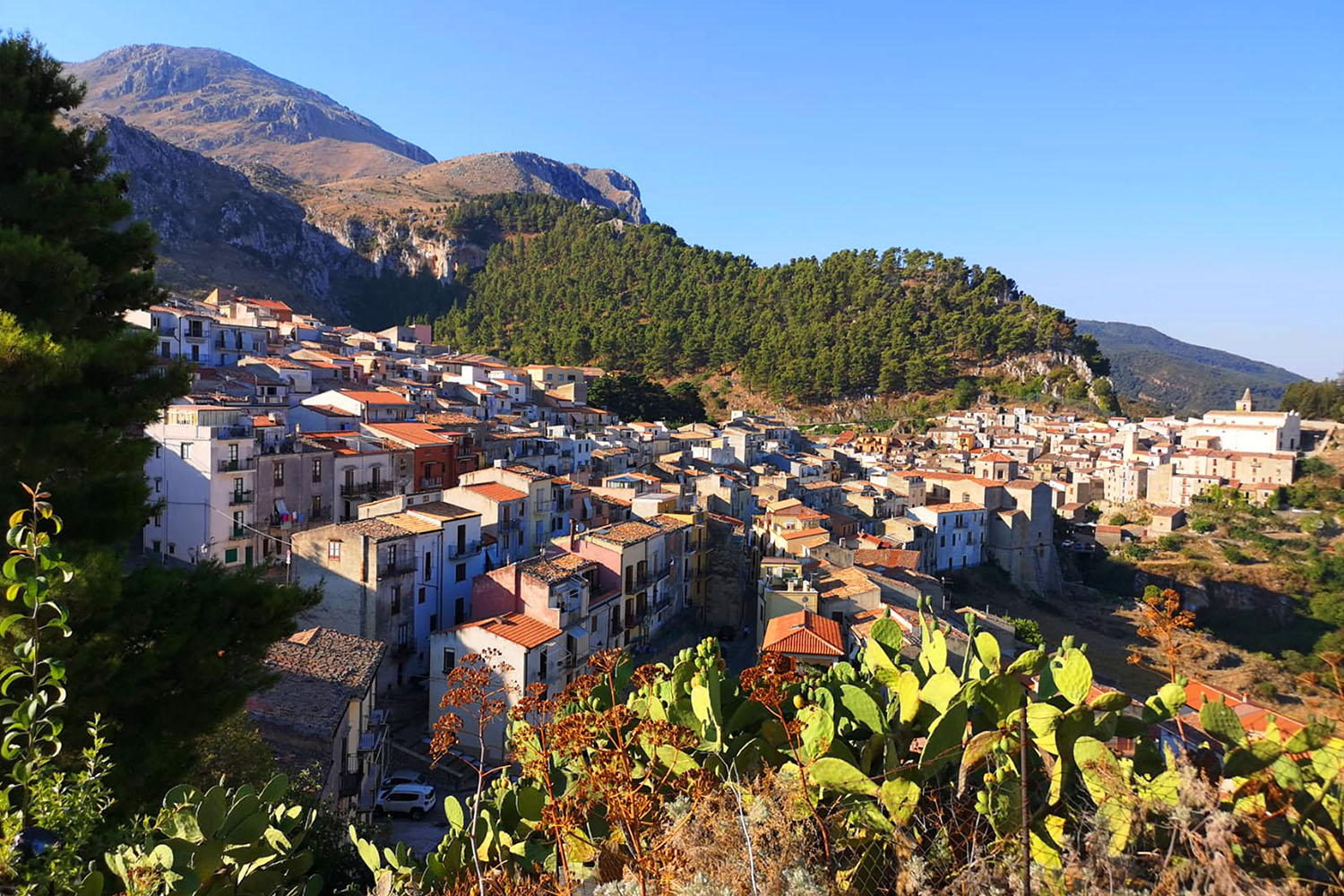 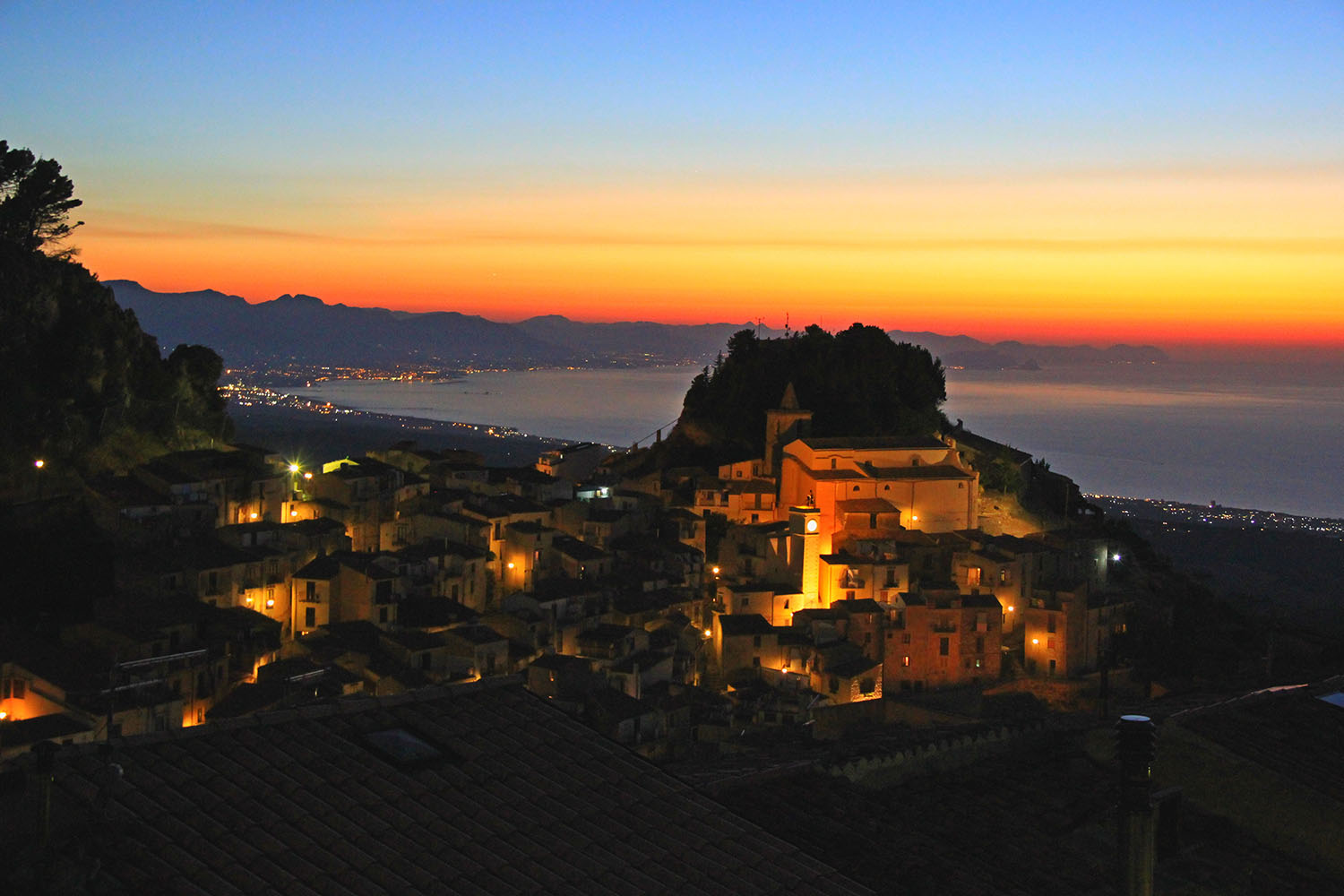 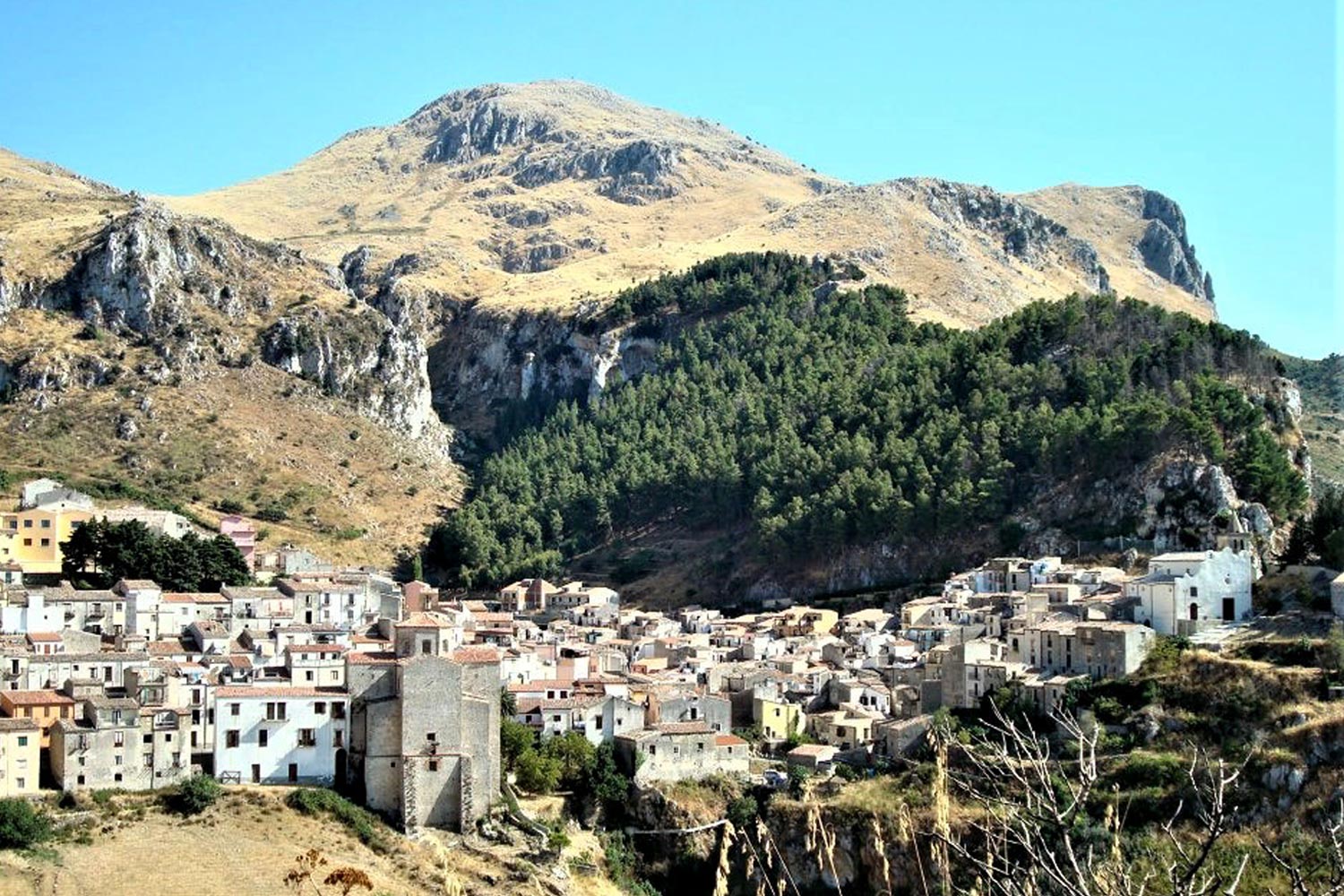 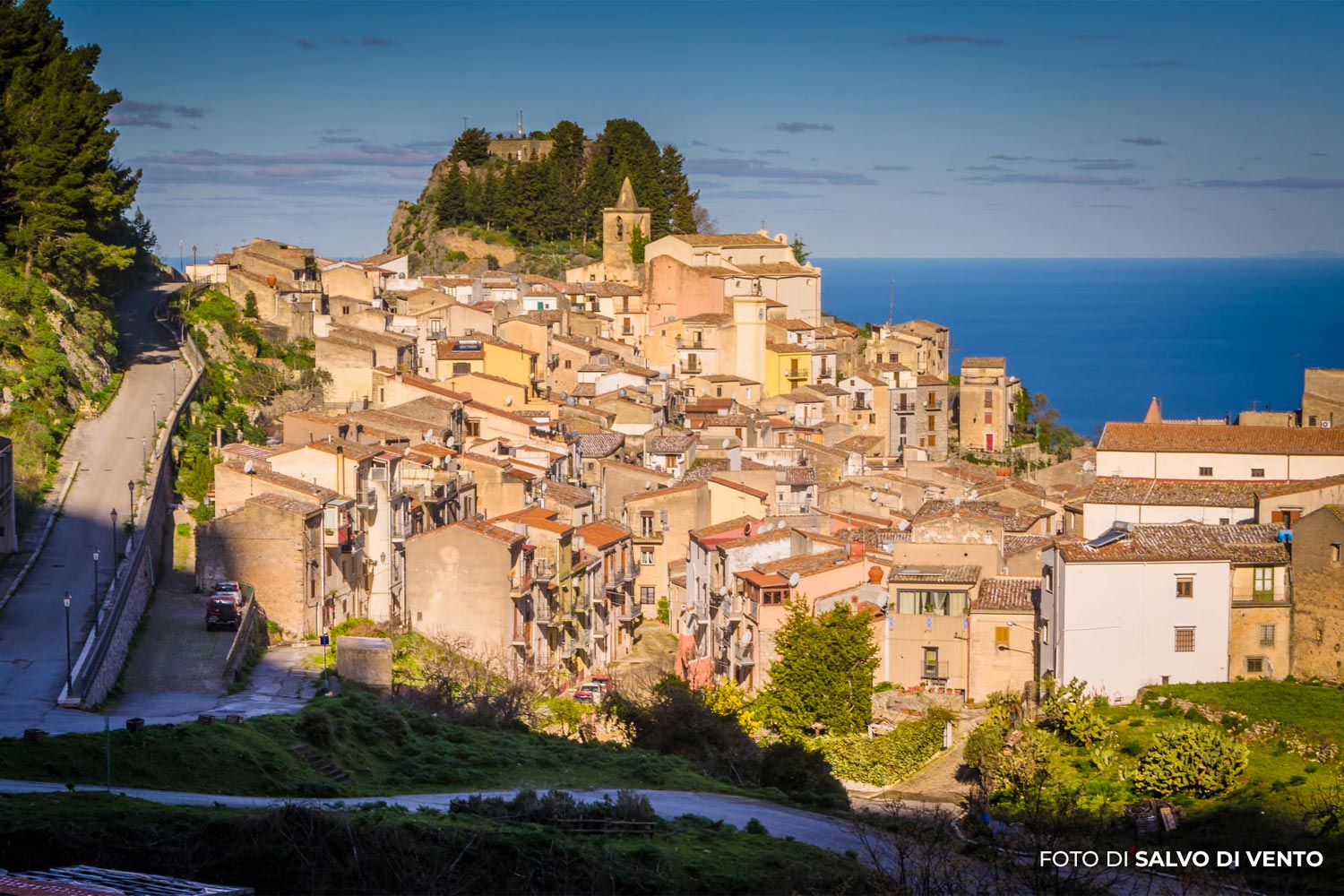 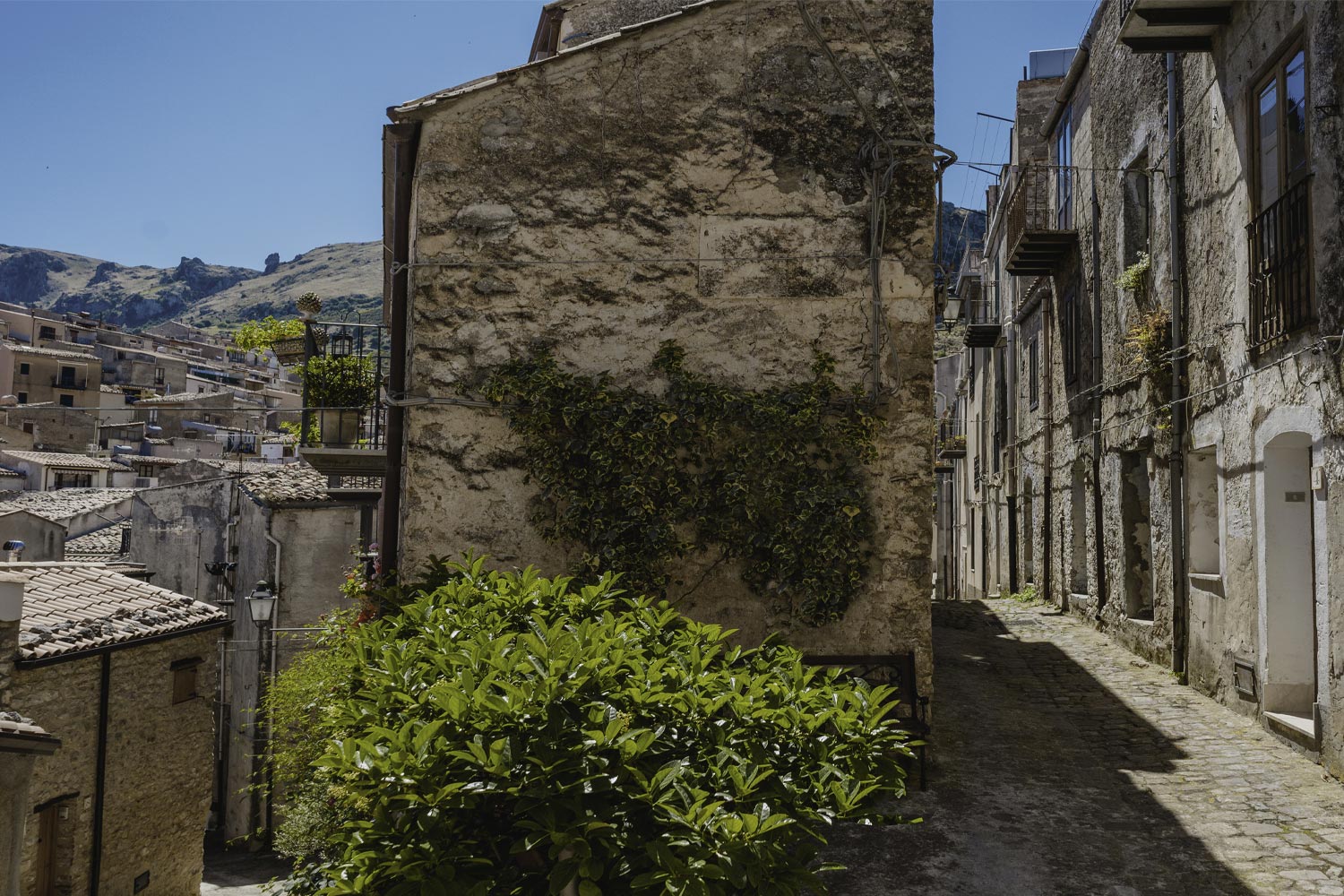 In this district it is possible to notice a circular house of one body, recently renovated, which still preserves a portal with a round arch, typical of the primordial Arab residences. This is the last house with original architecture, which today can be called the “House of the Thousand Years“.

From the news reported by the Arab historians Bauijan and Inb-Hawqal – later expanded by Amari – it would appear that Gratteri, together with Cefalù, Brucato and Marineo were conquered by the Saracens around 835-838. They managed to penetrate the castle of Qratiris, which they called Hottirisch, through an ancient gateway to the stronghold, still popularly called Dammuso today, certainly one of the most evocative points of medieval Gratteri.

From the Saracens quarter we will move to the old Bucciria, Petra, Santa neighborhoods – recently rebuilt thanks to ongoing studies – to then arrive at the Clock Tower, which, with its 100rintocchi, is one of the most significant symbols for the locals. A little ahead, we will look out over the rocky bank of the stream to let you listen to the legendary history of Macigna.

At this point, passing through the ancient quarters of the Porta Grande, Terra Vecchia and Nostra Donna, we will find ourselves in front of the Old Matrix, built towards the first half of the century. XIV next to the ancient castle of the Ventimiglia princes. On the main altar today stands the Madonna and child, a work of the Gaginian school and coming from the Norman church of the Rosary.

In the ancient apse behind, there are two interesting funeral monuments in mixed marbles within which rest the remains of Maria Filangeri, wife of Lorenzo Ventimiglia († 1650), and of his nephew Gaetano, prince of Belmonte († 1744).

Right wall you can still see what was an opening, which communicated directly with the rooms of the Barons, inside the outskirts of their castle. We will then show via Arcarìa, an alley hidden behind a stone drinking trough, where the prisons were located at the foot of the ancient fortezzanote for the obscure story of Don Antonio Ventimiglia who locked up the bishop of Cefalù, Niccolò De Burellis, found lifeless on his knees and with his eyes in the sky.

Our journey will proceed towards the “Passo della Scala” where the Via dei Promestratensi begins and reaches the Norman abbey of San Giorgio. From that viewpoint the landscape is like a postcard. Looking out in front of the Carapé cliff, you will learn the story of the talismans of the women of La Scala and that of the Souls of Purgatory, of the votive shrines located today inside the small church of the Crucifix. of the twentieth century, called Parisèa, from the story of the dialectal poet Ciccu Di Maria, inspired by a true story. After visiting the churches of San Sebastiano and Sant’Andrea, we will conclude our intense itinerary in front of the cloister of the Municipality, once belonging to the Convent of Santa Maria di Gesù, one of the oldest churches in the country, where a more than deserved awaits you refreshment. Get ready for an adventure not to be missed, to discover one of the most beautiful and mysterious villages of the Madonie.

For more details on the excursion and on the map of the itinerary, visit the following link: eventi.visitgratteri.com